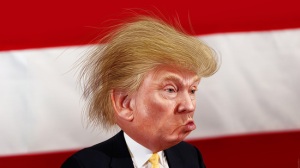 I tried so very hard to not acknowledge Donald Trump’s shenanigans, instead I sat back silently watching him making a fool of himself with his ridiculous comments.  Of course my wife and I would discuss his comments among ourselves, but that was as far as we were willing to go. For we were both thinking that the American people would see through him, and wouldn’t take him seriously.  However, this candidacy that was looked upon as a joke, by myself, my wife, the media, and many other people, may well become a reality.

For the last four months we’ve been  hearing about the latest ridiculous rants or comments made by “the Donald,”  however, as opposed to him being a laughing-stock, he is actually getting the attention of the American people.  Are these people who are following him and taking him seriously for real?  I am completely disappointed to learn that some people actually agree with some of the things that have been coming out of his mouth.

Donald Trump has been very consistent with his ridiculousness and has repeatedly shown, without any disdain, that he is a racist. His actions, comments and rants have not gone unnoticed. If you were to search on google.com for ridiculous comments made by Donald Trump, you would receive quite a few results.

Here are some great articles written by various people and organizations for you to take a look at:

Donald Trump: Top 10 Most Ridiculous Comments Made By The Republican Candidate.

Do people realize that by voting for this man that they are actually telling their neighbors, co-workers, family members and friends that they too feel like he does?  That they too are racist against, Blacks (African-Americans), Jews, Mexicans, Muslims and Gays.  Let’s just face it, not only these select groups but any minority group or individual, including women.

It’s interesting how incredibly absent-minded some people can be, does anyone remember the wall in the USSR and how as Americans, we believed in our hearts that it was wrong to have a wall there?  But now that Donald Trump has suggested putting up a wall at the border to keep Mexicans from coming in, some Americans are agreeing to this ludicrously.

Not only that, but Donald Trump has repeatedly made a fool of himself with crazy comments about what America needs, but he has actually been attacking other candidates  like a school boy in grade school.  Like really, who cares about what an opposing candidate looks like?  It’s about experience and the will to continuously bring America into a progressive state and not to go backwards.

Donald has already begun to make promises to the American people to reverse Marriage Equality, is he for real?  Oh yes I believe he is and I also sincerely feel that if Donald Trump makes it to the White House that he will not just stop there. He will do everything in his power to take America back in time to segregation and increase hatred and bigotry.  America does not need a business person to run its country, it needs a responsible individual who will continue to meet the needs of all American people and not just a select group.  Our country has shown some progress in equality and meeting the needs of all Americans, however, I fear that if Donald Trump has his way, all progression will become a memory and the other countries that are presently way more progressive that America will continue to take the lead, leaving us in the dust.

Published by The Unapologetic Lesbian

I am a Lesbian, wife, mother and writer and proud of it. I believe that Unity is the key to the advancement of achieving the Equals Rights we deserve, WE HAVE TO BAND TOGETHER in order to succeed. View all posts by The Unapologetic Lesbian